Pomacentrus andamanensisis commonly referred to as Eyespot Damselfish. Difficulty in the aquarium: There are no reports available yet that this animal has already been kept in captivity successfully. Toxicity: Toxic hazard unknown. 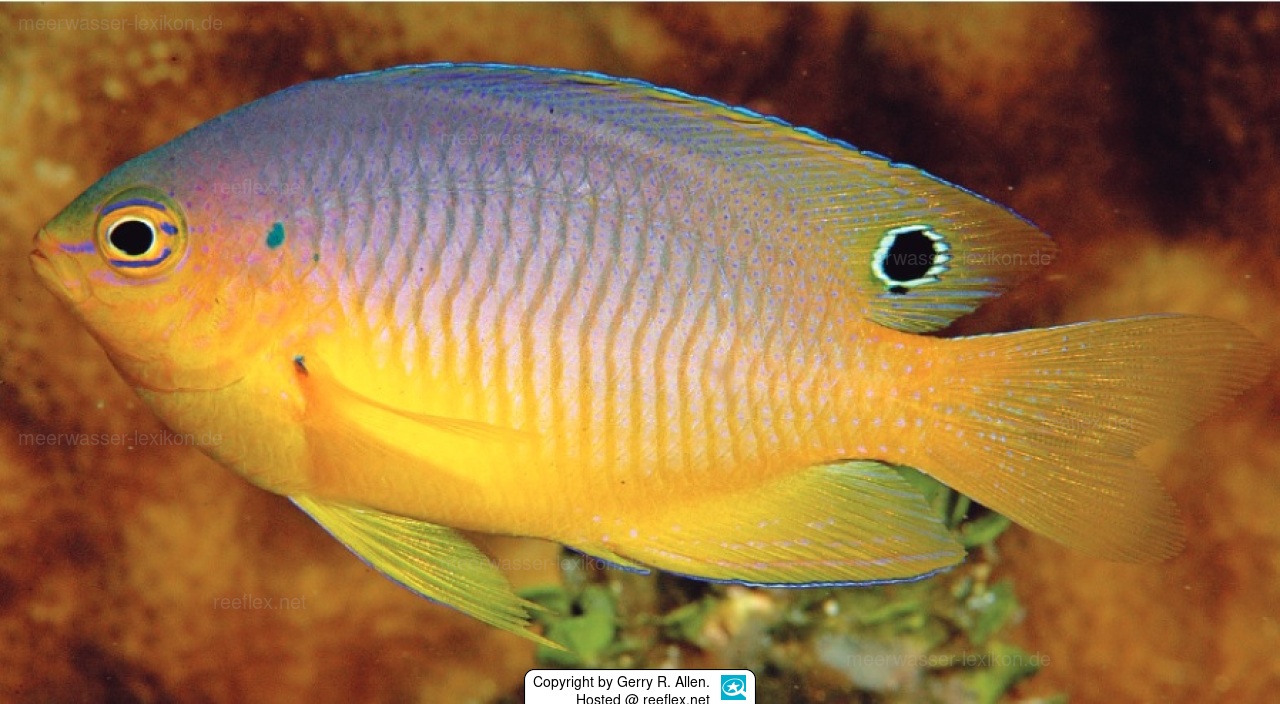 Sea depth:
2 - 35 Meter
Size:
4,6 cm - 6,4 cm
Temperature:
27°C - 29°C
Difficulty:
There are no reports available yet that this animal has already been kept in captivity successfully
Offspring:
Not available as offspring

Pomacentrus andamanensis was described from 45 specimens, 19.8 - 64.3 mm lateral length, collected from coral reefs in the Indian Ocean, Andaman Sea off western Thailand.
This species also occurs in the Andaman Islands, Myanmar, and the northwestern tip of Sumatra, based on collections (with tissue samples), underwater photographs, and observations.

Pomacentrus andamanensis is a sibling species of Pomacentrus amboinensis from the western Pacific, but differs from this and the Micronesian species of the complex, Pomacentrus bipunctatus, primarily in adult coloration, particularly a conspicuous ocellus on the posterior dorsal fin in adults that is found only in juveniles in the other species.

In general, Pomacentrus andamanensis is pale lavender to bluish gray on the upper two-thirds of the body and dorsal portion of the head, yellow on the snout, cheek, operculum, thorax, abdomen, and caudal peduncle.
Each body scale shows 1-3 small blue spots; pale lavender markings on side of head and small greenish spot on upper operculum near origin of lateral line.
Iris is yellow with a blue stripe near the upper and lower margins and a small blue spot behind the upper posterior corner of the pupil.
Dorsal and anal fins are yellowish with blue to pale lavender stripes and spots, a prominent neon green outlined black spot between about the sixth to eleventh soft fin rays.
Caudal and pelvic fins are yellow with a fine blue outer margin, pectoral fins translucent with a small blackish spot at the base of the uppermost rays.

The species name refers to the native range in the Andaman Sea and is treated as a masculine geographic adjective.