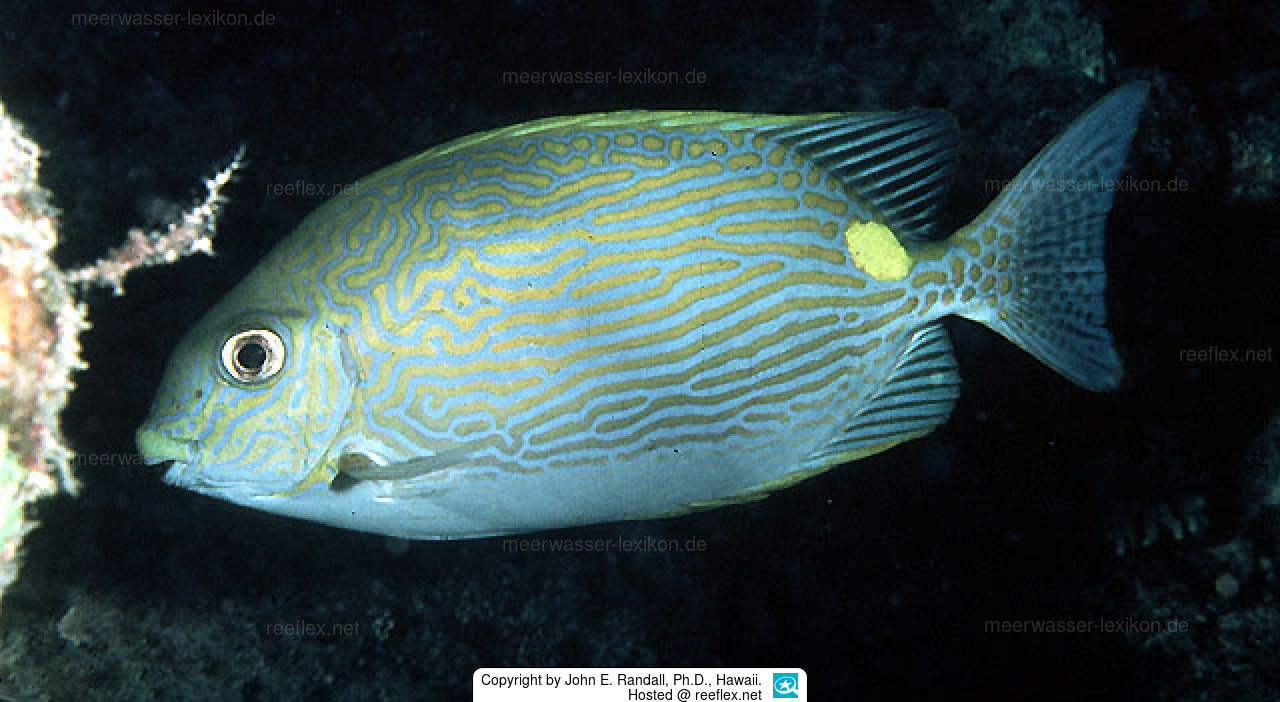 This is a general hint!
Siganus lineatus has a harmful toxin.
As a rule, animals with a harmful poison do not pose any danger in normal Aquarieaner everyday life. Read the following husbandry information and comments from aquarists who already keep Siganus lineatus in their aquarium to get a better picture about the possible danger. However, please be careful when using Siganus lineatus. Every human reacts differently to poisons.
If you suspect that you have come into contact with the poison, please contact your doctor or the poison emergency call.
The phone number of the poison emergency call can be found here:
[overview_and_url_DE]
Overview Worldwide: eapcct.org

Siganus lineatus, also known as the Goldspot spinefoot and Lined rabbitfish, can be found throughout the Indo West Pacific. From the Maldives to India and Sri Lanka to Ogasawara Is (Japan), eastern Indonesia and Papua New Guinea, south to Australia. In the western Pacific from Solomon Islands to Vanuatu, from New Caledonia to the Philipines, Palau and Micronesia.

Typical for the Goldspot spinefoot is his relatively small head with thick, forgoing lips, yellow lines along the body, which ends in a generally bright yellow spot in front of the tail fin.

He don't look like it, but Siganus lineatus is a poison-fish. The first 13 rays of its dorsal fin, and 2 abdominal and 7 anal fins contain a poison-secreting tissue that don't have any other fish in this order. The poison causes immediately after the injection a fairly strong, often burning pain that lasts for approximately one-half to forty-five minutes, but then decreases. The venom is not lethal to humans but can cause significant problems at people with allergies. Affected parts of the body should be treated immediately with hot water (5o ° C). Since it is a protein containing poison the effect is first alleviated and finnaly eliminated. Who will care for such a fish should be careful when handle in the aquarium.

The Goldspot spinefoot belongs to the rather small species of his family, it is usually not larger than 25 cm. Siganus lineatus feeds on both, algae as well as animal food.