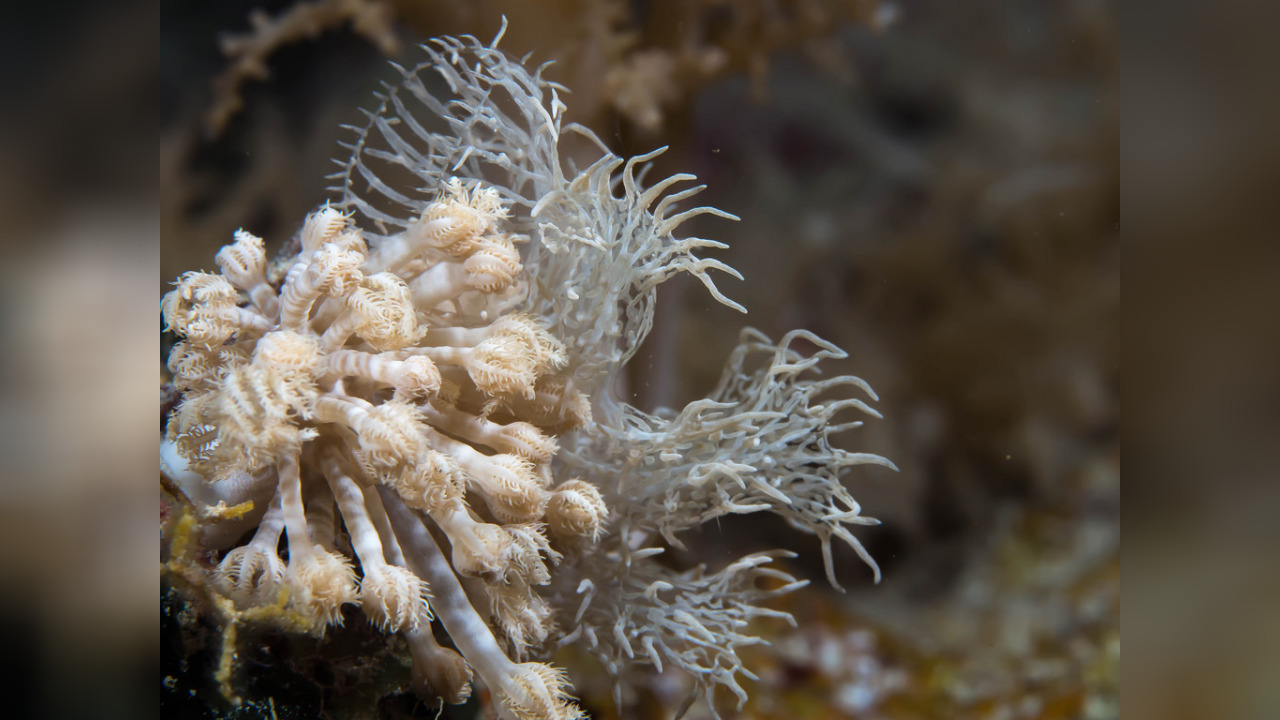 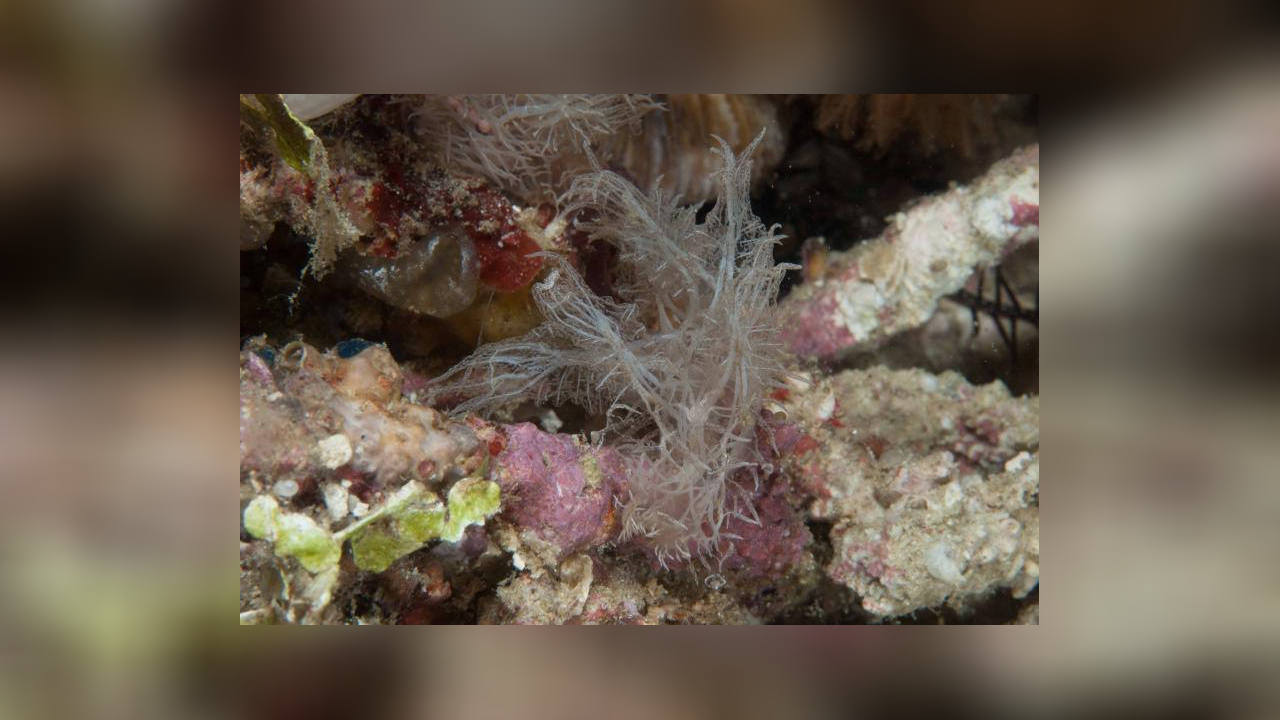 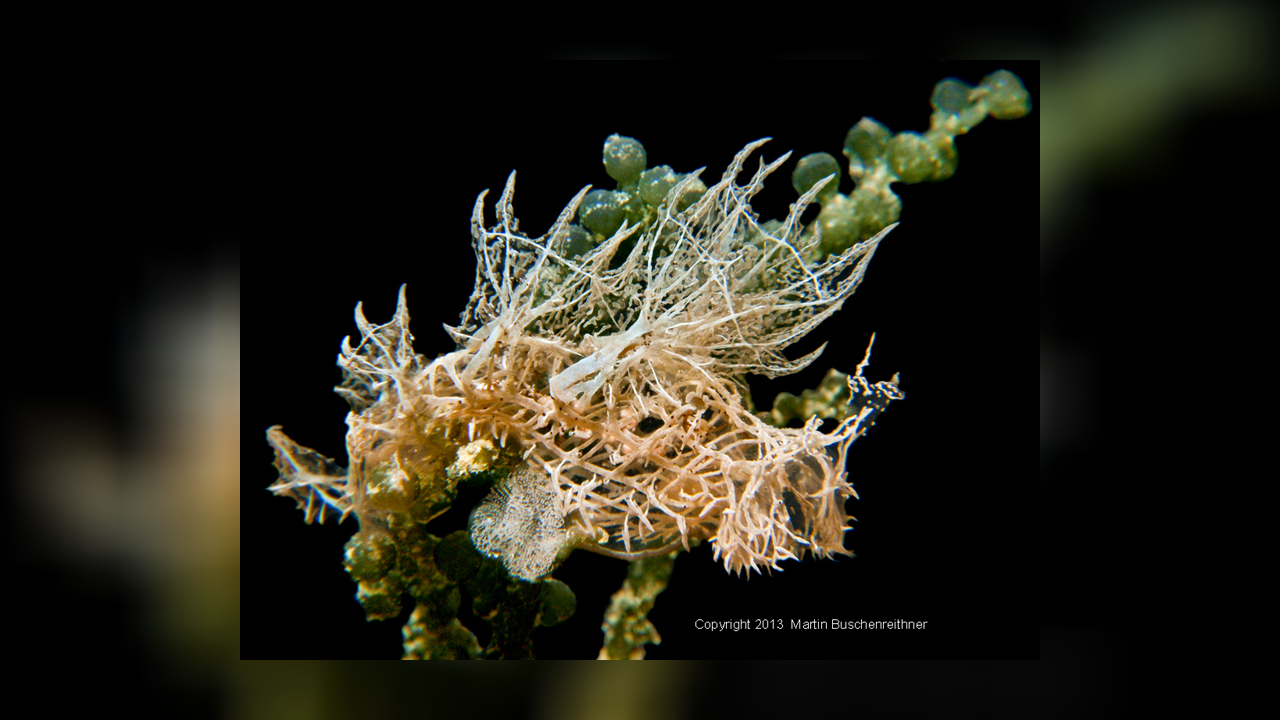 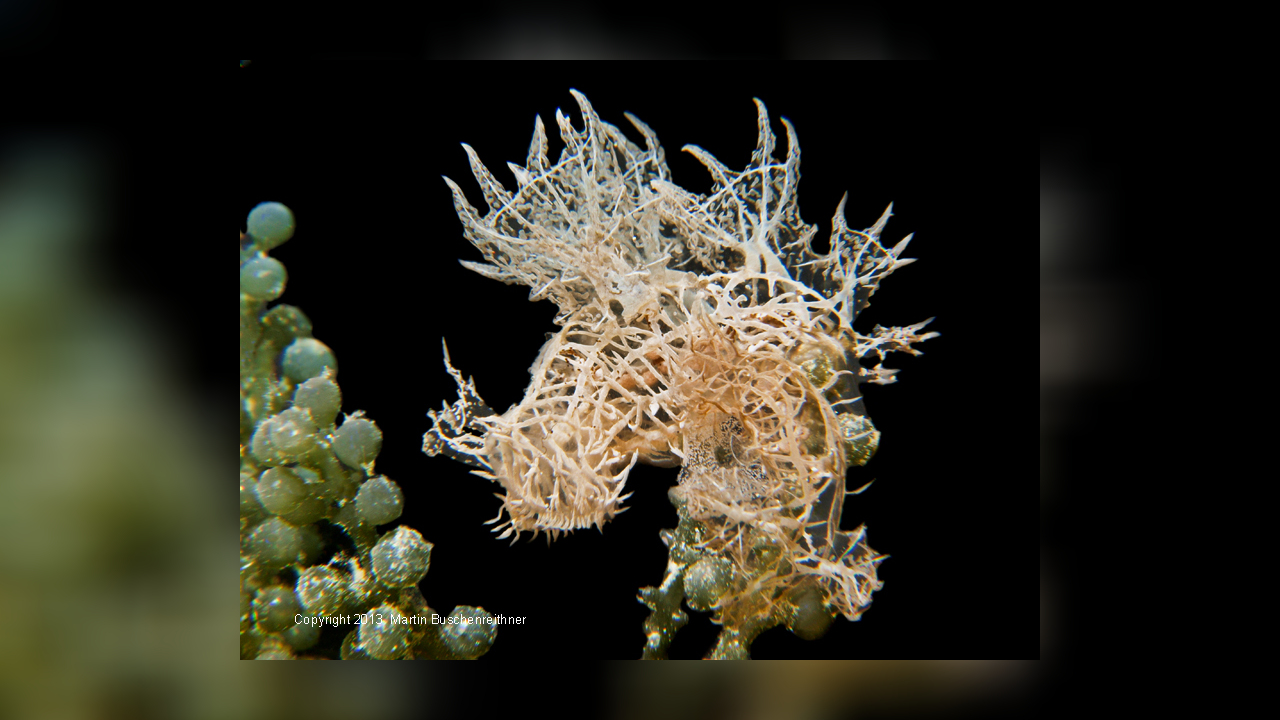 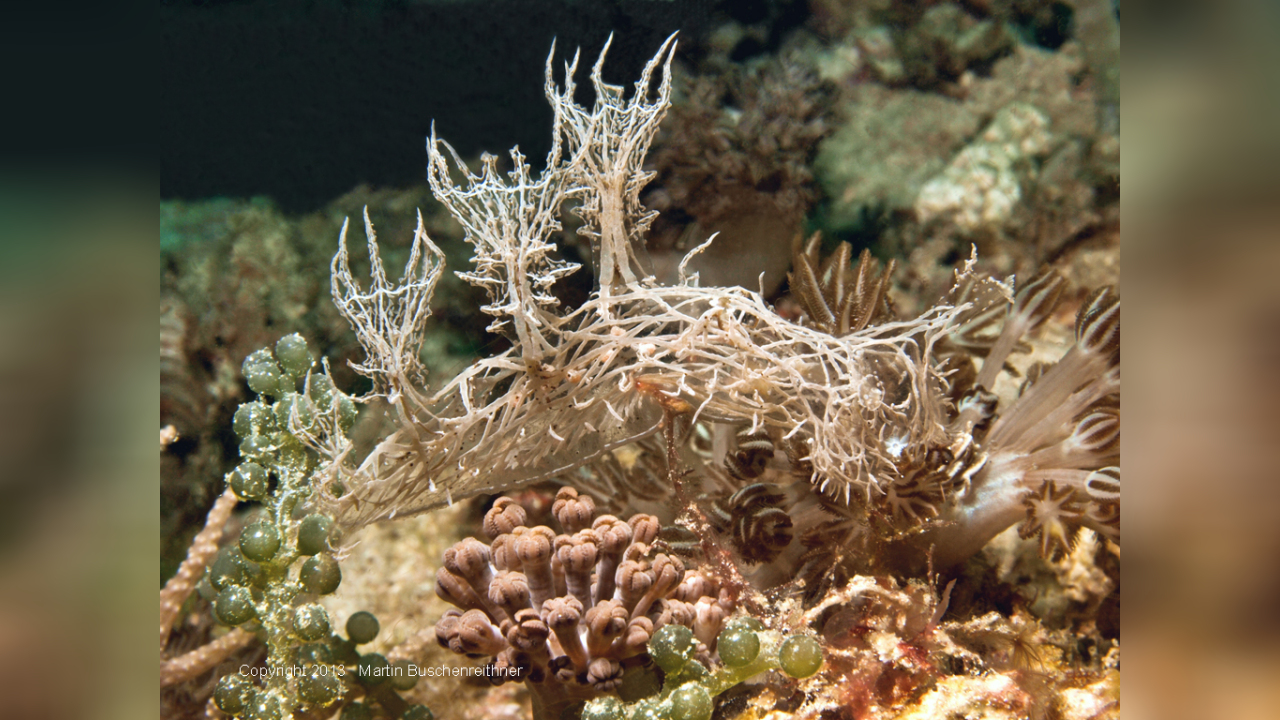 "This absolutely unbelievable species doesn't even look like an animal, let alone a nudibranch. If we hadn't found the sheathed rhinophores one would think it was just a string of snot in the water.

We first learned about this species when Neville Coleman published his Nudibranchs Encyclopedia (page 389 & 390). When Nev offered the photo to us to use in "Indo-Pacific Nudibranchs" we still had no specimens to base a description on. Finally Nev provided one to Terry Gosliner and Marta Pola, who jointly undertook a study of this bizarre Melibe! Their findings were recently published in the Journal of Systematics and Biodiversity

I have had the pleasure of personally finding several specimens in the Komodos Islands region of Indonesia, and diver/photographer par-excellance Kevin Lee has just returned from the same area where he saw dozens. Finding this transparent gem can be a challenge, but once you know what to look for, they seem to be abundant. The photo above, and in Nev's book where lighted from the side giving the species an alien look of series of branched tubes. These are actually interconnected digestive gland tubules occupying most of body and cerata.

When you first come across the M. colemani , it looks more like a tuft of algae or hydroids waving in the surge. Agreeably this photo is not as dramatic looking as the side lit photos, but it is what your eye sees and you can see what appears to be some sort of anatomy. Its color under normal lighted conditions in a creamy brown.

Externally, M. colemani is similar to M. bucephala Bergh, 1902 (Bill Rudman's Sea Slug Forum) and M. engeli Risbec , 1937, in that it has cerata with elongate apical papillae. However, in M. colemani, the cerata are laterally flattened rather than cylindrical, as in the other two species. Also, Both M. bucephala and M. engeli also differ in having rhinophoral sheaths with a sail-like extension on the posterior side bearing numerous elongate papillae. In contrast, M. colemani has largely cylindrical rhinophoral sheaths with a single elongate papilla at the apex.

Gary Cobb of Australia recalls the story of this species discovery told to him by Neville himself. Gary has shared this with us below:

"..."Of all the creatures I have discovered perhaps the most favorite and most bizarre is Colemans Melibe. Although I have used my name as the common name, it does not necessarily mean that when it is finally described that it will remain as that. However, as it does not have a reference name it will do for the time being.

I was on a second (nice and easy) dive of the day at the jetty drift at Mabul Island in Malaysia with my very keen dive guide Cindy from SMART DIVERS. The dive is made up of drifting along a coral/soft coral reef slope with lots of crevasses and a few small canyons and gutters, which angled down to a soft bottom at around 15 to 18 metres. As usual we were searching for nudibranchs though most of those found were species relatively common to Mabul.

I checked my air and noticed I was down a bit, but as it was the end of the dive I just kept skip breathing along as is my habit and searching everything I could, knowing that I had only 12 to 15 minutes of air left.

There was a brilliant little species of transparent sea squirt with opaque white markings that I was interested in (Banded Ascidian Ecteinascidia bandanensis) and it appeared to live in small clumps of threes in the brown encrusting soft coral Briarium sp.

Swimming past one large colony of the soft coral I noticed that there was something white sticking out between the polyps that did not appear as though it should be there. It was just a non descript small piece of transparent tissue with some opaque white markings that I assumed was the little sea squirt. However, something seemed different and I breathed out and sank down a little to investigate.

Once I was looking at the object through my bi-focals I could see it was certainly not a sea squirt. I waved some water over the polyps and some retracted a little and I could see more of the object. My heart went berserk; it appeared to be some kind of soft bodied creature that resembled nothing in my visual vocabulary what so ever. However, it seemed to be half dissolved and for some moments I wondered if it was just decomposing tissue. I tenderly touched all the polyps surrounding the object so as to get a better look. Once it was revealed it began crawling and at that moment I knew it was an extraordinary nudibranch, but what to do? I had only a few minutes of air left and already the guide was signaling time to go up to meet the pickup boat. I signaled to Cindy and showed her what I had found, begged a few more minutes bottom time and went to work with my NIKONOS 111 with 2.8 lens and wire frame.

The challenge was to get it to actually look like something. Even though I photographed it from every angle, I knew that from a horizontal position the aspect was not descriptive enough, but it appeared to be so fragile that the slightest touch would cause it to disintegrate..."

Sometimes in underwater photography when you are running out of air and time, one has to make decisions to get the necessary shot. So, I slowly wafted some water over the nudibranch and it lifted off the bottom and allowed me to situate it towards the edge of the soft coral where I could get a couple of lateral aspect images and then it was time to go. I hung off in mid-water for a three minutes safety stop as Cindy climbed aboard the dive boat. Everything was so rushed that even on the way back to the resort I still couldn't comprehend what had actually happened. However, Cindy verified that she had seen it when I showed her but wasn't sure what it was at the time. It was a long haul to get home to Brisbane, Queensland and then wait to have the developed transparencies back from the processor and be able to prove that we had really seen such an unbelievable creature. I need not have worried, I managed run off eight images all of which were excellent studies from different aspects of the nudibranch in situ. Consequently I published seven of them in NUDIBRANCHS ENCYCLOPEDIA the only known images of this remarkable species."

The most depressing side of this story is that Neville passed away only little over a month before the species was named after him. Neville will be missed, but remembered in his many discoveries."