Plotosus japonicusis commonly referred to as Japanese eeltail catfish. Difficulty in the aquarium: Only for advanced aquarists. A aquarium size of at least 1000 Liter is recommended. Toxicity: Highly toxic. 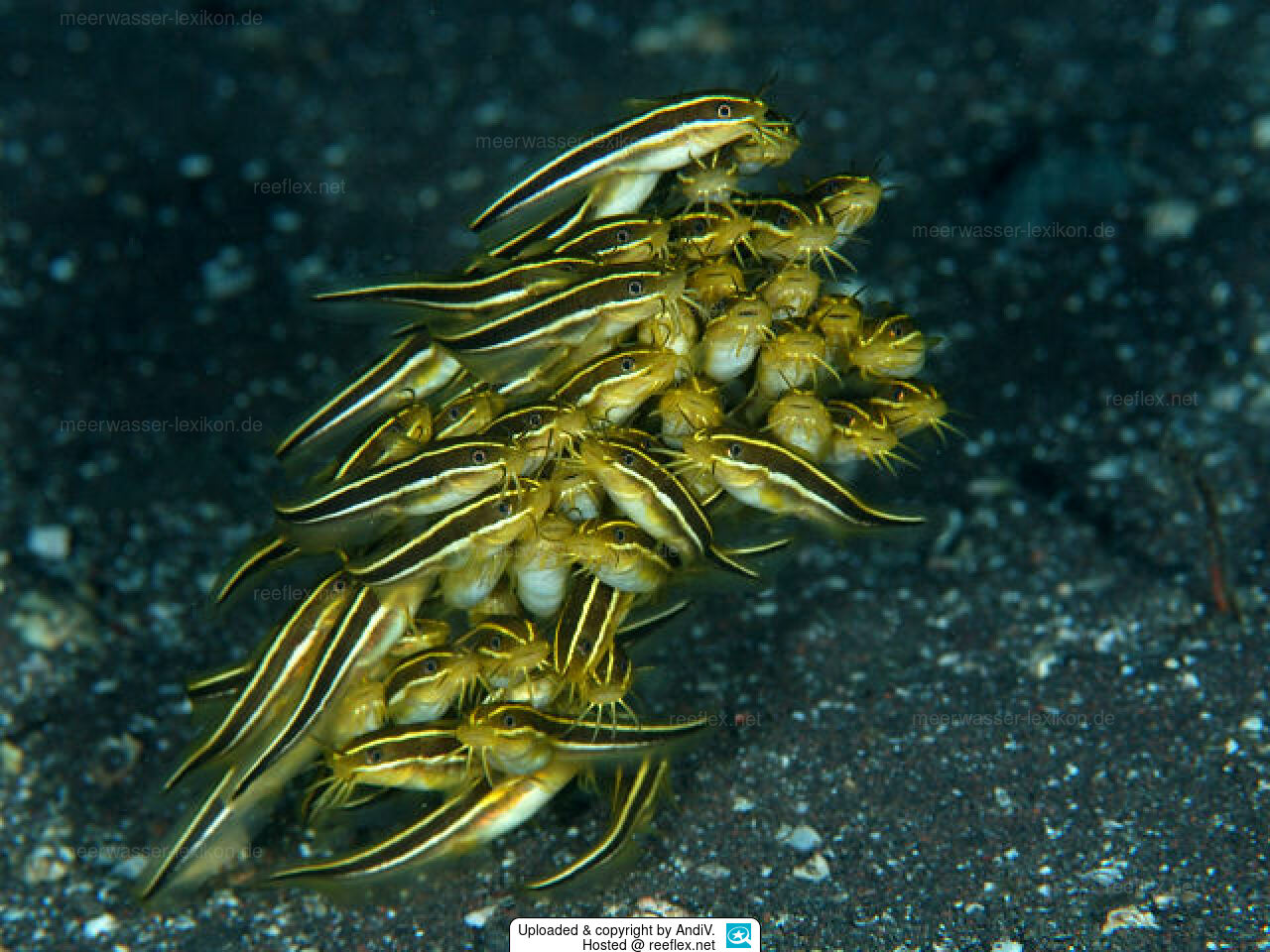 This message appears for poisonous, very poisonous and also animals whose poison can kill you immediately. Every human reacts differently to poisons. Please therefore weigh the risk for yourself AND your environment very carefully, and never act lightly!

Animals incorporate a number of unique methods for detecting prey, but for the Japanese sea catfish, Plotosus japonicus, it is especially tricky given the dark murky waters where it resides.

John Caprio, George C. Kent Professor of Biological Sciences at LSU, and colleagues from Kagoshima University in Japan have identified that these fish are equipped with sensors that can locate prey by detecting slight changes in the water’s pH level.

A paper, “Marine teleost locates live prey through pH sensing,” detailing the work of Caprio and his research partners, will be published in the journal Science on Friday, June 6. This is the first report of any fish using pH to find live prey.

“What makes this so interesting is that the discovery was unexpected, quite serendipitous,” Caprio said.

The study was an offshoot of work initiated in 1984 when Caprio, a specialist in aquatic vertebrate taste and smell systems, began a collaborative investigation at Kagoshima University examining the physiology of the taste system of the Japanese sea catfish. While performing electrical recordings from the fish barbells, or “whiskers,” he noticed that every so often some new sensory nerve fibers would respond at a much larger amplitude than the others.

“Immediately I knew that there was something different about those nerves, but I was working on a different project funded by the National Science Foundation and had to put my curiosities on the back burner,” Caprio said.

In 1986, Caprio’s curiosities got the best of him, and he asked his friends in Japan to ship him some of the catfish so that he could examine what was triggering such huge responses in the fish.

“I suspected the response was due to a change in pH caused by some of the tested stimuli,” he said. “It was obvious that there were sensory nerve fibers in these fish that were responding to transient lowering of the pH of the seawater; however, what I did not know was what function this response served.”

Caprio tabled the investigation again, as other research activities took precedence, and resumed his analysis in 2005 with support from the National Institutes of Health and LSU. Caprio traveled to Japan six times between 2005 and 2013, staying at least a month each visit. During this time, he focused his attention on the fishes’ nervous system, while colleagues conducted behavior experiments.

For the physiological experiments, the fish were outfitted with electrodes that allowed the recording of the fishes’ responses to water of varying pH. It was during this time that they determined that the function of the sensitivity of the fishes’ barbells to minor changes in water pH was due to the respiration of small sea worms, polychaetes, a primary prey of the sea catfish.

The sea worms live in tubes or burrows in the mud. As the worms breathe, they release tiny amounts of carbon dioxide and acid, producing a slight decrease in the pH of the seawater that the nocturnal sea catfish detects.

“These fish are like swimming pH meters. They are just as good as a commercial pH meter in the lab,” Caprio said.

For the behavioral experiments, the researchers placed the fish in aquariums filled with seawater, along with the sea worms, which were placed into glass tubes within the coral substrate of the aquarium. The researchers used infrared photography to show that the nocturnally active fish spent significantly more time in the vicinity of the worms than in other locations in the aquarium. The researchers also confirmed that the catfish were attracted to a location in the aquarium where seawater of a slightly lower pH was being emitted from a small tube even when no worms were present. In addition, the fish became extremely active, searching for food and even bit repeatedly at the end of the tube.

The research indicates that the catfishes’ sensitivity was highest in natural seawater of pH 8.2, but decreased dramatically at pH less than 8. These findings imply that the food-locating abilities of Japanese sea catfish could be compromised by ocean acidification, the ongoing decrease in the pH of the Earth’s oceans due to uptake of carbon dioxide from the atmosphere caused in great part by man-made activities.

Studies show that prior to the industrial revolution, carbon dioxide levels were approximately 280 parts per million. Today, it is 390 parts per million, and scientists predict that the levels could increase to 900 parts per million by the year 2100. According to the National Oceanic and Atmospheric Administration, the oceans absorb about a quarter of the carbon dioxide released in the atmosphere each year, resulting in increasing acidified seawater.

“Once the pH of the ocean drops much below 8, shell producing invertebrates can no longer produce their shells,” Caprio said. “Our work could possibly be an indicator of the possible effects of ocean acidification on marine vertebrates. If ocean acidification continues at its same rate, we do not know if marine life will be able adapt to such a rapid alteration in pH. It is possible that the sensors could adapt to such a change, but we are not certain that this will happen. As of today, what we know is that these sensors work optimally in the vicinity of pH of 8.2, that of normal seawater. If ocean pH drops much below 8, a number of deleterious events are likely to occur.”
Text source: LSU Research News